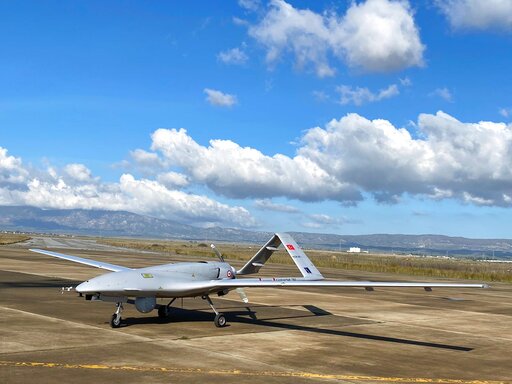 A Turkish-made Bayraktar TB2 drone is seen shortly after its landing at an airport in Gecitkala, known as Lefkoniko in Greek, in Cyprus, Monday, Dec. 16, 2019. Turkey has dispatched the...

NICOSIA, Cyprus (AP) — Cyprus on Sunday denounced Turkey as a “pirate state" that flouts international law as Turkey's bid to drill for natural gas in waters where Cyprus has economic rights rekindled tensions over energy reserves in the eastern Mediterranean.

Cyprus said Turkey was now attempting to drill inside an exploration area, or block, south of the ethnically split Mediterranean island nation that's already licensed to energy companies Eni of Italy and Total of France.

This would be Turkey's fourth such drilling effort since last July when it dispatched a pair or warship-escorted drill ships to the island's west and east. It would also mark the second time a Turkish ship was drilling in a block licensed to Eni and Total.

Overall, the two energy companies hold licenses to carry out a hydrocarbons search in seven of Cyprus' 13 blocks off its south coast. Other companies holding such licenses include ExxonMobil and partner Qatar Petroleum, as well as Texas-based Noble Energy and Israeli partner Delek.

Cyprus said despite emerging energy-based partnerships among the countries in the eastern Mediterranean, Turkey has opted to “go down a path of international illegality" of its own accord. It said Turkey has “provocatively ignored” repeated European Union calls to stop its illegal activities.

The EU has also adopted a mechanism to sanction individuals or companies involved in illegal drilling off Cyprus.

Greece's foreign ministry said in a statement Sunday that Turkey's latest action comes on top of numerous violations of international law in the wider region that aim “to serve expansionist aspirations."

The ministry said in a statement that such breaches of international law won't be made legal no matter how many times they're repeated.

Turkey, however, insists it's protecting its rights and interests, and those of breakaway Turkish Cypriots, to the region's energy resources. It says it's carrying out drilling activities as part of an agreement with the Turkish Cypriots.

Cyprus was split in 1974 when Turkey invaded following a coup by supporters of union with Greece. A Turkish Cypriot declaration of independence in the island's northern third is recognized only by Turkey. Cyprus joined the EU in 2004, but only the southern part, seat of the island's internationally-recognized government, enjoys membership.

Turkish Foreign Ministry spokesman Hami Aksoy said Sunday that Turkish Cypriots have as much right to the island's gas deposits as Greek Cypriots and that “no one should doubt” that Ankara would continue safeguarding their rights.

Aksoy said a Turkish Cypriot proposal to share potential gas revenues remains in play. He also blasted the EU for "double standards” in its approach to Turkey and the Turkish Cypriots, whose “existence and rights" he said the bloc ignores.

The Cyprus government dismissed Turkey's assertions of protecting Turkish Cypriot rights as “cynical and hypocritical" since Ankara claims 44% of the island's exclusive economic zone as its own.

It also said any gas exploration deal that Turkey has signed with Turkish Cypriots is legally invalid according to U.N. resolutions.

Copyright 2020 The Associated Press. All rights reserved. This material may not be published, broadcast, rewritten or redistributed.